Should you tie Kids’ Allowance to Chores?

When we were growing up, we were given allowances as we had to buy our own lunches in school. We were given a fixed amount each day and whatever we did not spend, we got to keep it as our own savings. That was every child’s first foray in money management at the ripe young age of 7. In return for resisting the urge to spend that thirty cents on a cup of Coke, you got to watch your money grow over time from thirty cents to a dollar, then ten dollars and finally a couple of hundred dollars. I was not saving up for anything in particular but I got tremendous joy watching my money grow.

Yet today, I find it hard to give my kids allowance for nothing since they do not have to pay for school lunch in school. They either pack a lunch from home or get the free school lunch from school. It is just hard for me to reconcile to the idea of being paid for nothing, because this simply does not happen in the real world. However, not having a regular unconditional allowance sadly takes away a wonderful opportunity for them to learn money management from young.

On the other hand, there is plentiful controversy over conditional allowances that are linked to completing chores for money. The premise being kids should not be paid for chores because completing chores are meant to be a form of contribution to the family, not for financial gains. I can empathize with this thought because we definitely do not want to rise kids who value everything in money terms.

To this end, we have decided to take a hybrid approach to balance the need for allowances and getting the kids involved in household chores. The kids do not get paid for chores that are considered day-to-day living activities such as putting away their dishes after meals, doing their own laundry, cleaning up their rooms or putting away their toys.

They get paid for larger chores that could be be considered as work for their age. The idea was to find opportunities for them to earn extra money for their allowances. For example, when my son was eight, he would be paid for taking out the trash to the garbage. As he got older, when he could take on bigger jobs like mowing the lawn, we would then delegate taking out trash as a regular chore that he would do as a contributing member of the family and not be paid for it.

I hope this post was helpful! If you are looking for a fuss free way to pay your kids for chores and help them track their money, do check out our KidsHomeBank app on the app Store. 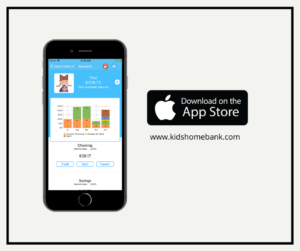 Next Post: Why is it Important to teach Kids to Save Money? »

We use cookies to ensure that we give you the best experience on our website. If you continue to use this site we will assume that you are happy with it.OkPrivacy policy